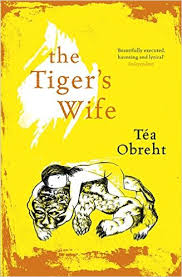 There were mixed reviews of The Tigers Wife by Tea Obreht in this months The Craft Collective Book Group. While we all admitted that there were qualities that we liked, little stories within the larger story that were magical, most agreed that this book was a difficult read.
The narration in the book comes from a granddaughter who is telling the tales of her dearly loved grandfather who passes away at the start of the novel. This narration gives us layers, where we can flit between a 90’s war torn Yugoslavia and the life and childhood of an old man.
The tales encompass folklore of the times, a Tiger who comes to town, The Deathless man who no matter what is done to him cannot die and starts his story by proving this.
It’s certainly easy to see why the book has won so much accolade as it stands out from other’s and its narrative clings to folklore and mythology.

What did our readers think?

“I really liked it, there was one big story and then within that lots of little stories. I liked the fact that a lot of the characters are nameless and I liked all the folklore and myths. It was magical!”

“I liked the relationship between the grandfather and granddaughter. The smaller story of the Tiger’s wife was really interesting but I lost track of the plot a little bit. The Deathless man was interesting too and I found the 40 day death ritual gave me a lot to think about!

“It was not my style of book, and I felt a little bored”

Suggested further reading by one member of the book group is;
100 years of solitude by Gabriel Garcia Marquez