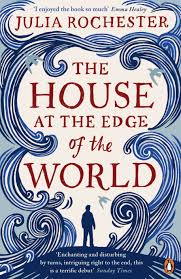 As far as stories about dysfunctional families go, this debut novel from Julia Rochester hits the nail on the head. But that’s not all this novel is about, themes of isolation, loss, death, the devil, mythology and incest all make an appearance, if somewhat brief.

John Venton’s drunken fall from a Devon cliff leaves his family with an embarrassing ghost. His twin children, Morwenna and Corwin, flee in separate directions to take up their adult lives. Their mother, enraged by years of unhappy marriage, embraces merry widowhood. Only their grandfather finds solace in the crumbling family house, endlessly painting their story onto a large canvas map.
His brightly coloured map, with its tiny pictures of shipwrecks, forgotten houses, saints and devils, is a work of his imagination, a collection of local myths and histo­ries. But it holds a secret. As the twins are drawn grudgingly back to the house, they discover that their father’s absence is part of the map’s mysterious pull.
The House at the Edge of the World is the compellingly told story of how family and home can be both a source of comfort and a wholly destructive force. Cutting to the undignified half-truths every family conceals, it asks the questions we all must confront: who are we responsible for and, ultimately, who do we belong to?
‘Wonderfully crisp and funny, and so full of vivid, surprising images that the reader almost doesn’t notice the moment that deep secrets begin to be revealed. I enjoyed this book so much’ Emma Healey, bestselling author of Elizabeth is Missing
Amazon review

The overall view of the novel from the group was that it was a complex yet interesting read delving deep into the dynamics of living in an isolated environment and in a small family unit. Descriptive with her prose on rural west country life Julia helps to transport you to an seemingly idyllic house in a beautiful part of the world.
Did we like all the characters? Perhaps not, but because of this they became more real, more believable in their behaviours.
Take from it what you wish, as there is much to take!

What did our readers think?

“It was a well written book with a bit of an unsatisfactory ending – they should have been more angry!”

“Promising as a first novel, well constructed and complex with a shifting plot. Certainly some intriguing issues covered”

“Really enjoyed this book. It was my recommendation for the group to read this. I would recommend a second read to fully grasp it”